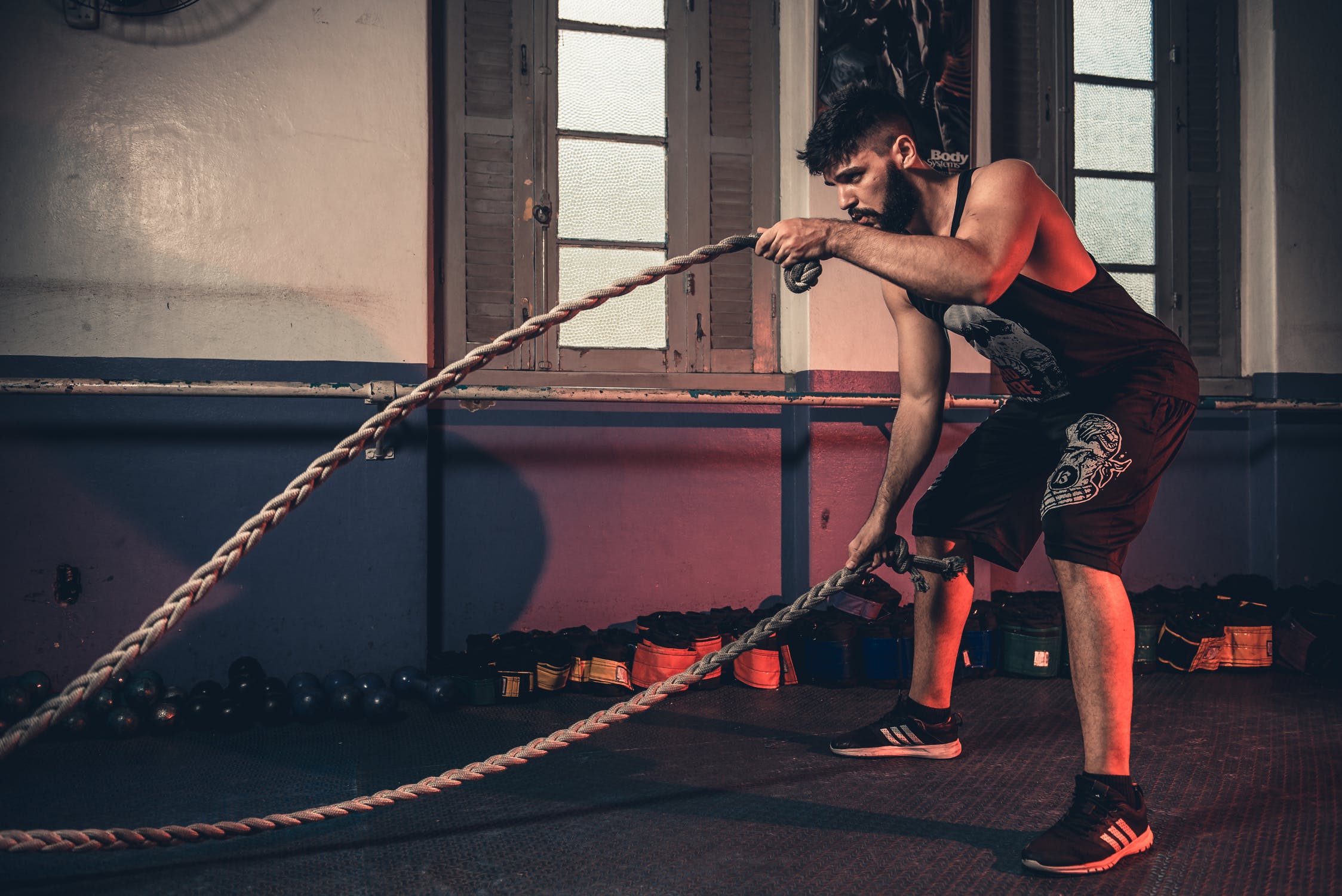 Are you sitting down and wondering, “What are battle ropes used for?”

This is a legitimate question and it’s one you should ask right away.

Battle ropes are often ignored in the gym and don’t get enough air time when it comes to modern fitness gurus. Why is this the case? Are battle ropes not good enough for cardiovascular activity?

This is a pertinent question and it’s time to start by understanding how battle ropes work.

This guide will take a comprehensive look at battle ropes and their benefits.

With the POWER GUIDANCE Battle Rope, you are getting something that’s comprehensive, safe to use, and has all the perks needed from modern battle ropes. If you are someone that wants to put in a good workout then it’s time to start here.

These battle ropes are perfect for beginners and will offer value right away.

What Are Battle Ropes Used For?

Battle ropes are used for several different purposes depending on a person’s goals.

For example, the most common purpose is to burn calories quickly while increasing the heart rate in a reasonable manner. This is done by actively taking the time to move the ropes in a functional way. A lot of people prefer using battle ropes for losing fat because it’s fun and offers an incredible burn.

There are many benefits associated with using battle ropes.

Along with being great for weight loss and burning loads of calories, it is also noted for offering athletic value. Many professional athletes are seen using battle ropes throughout their workout sessions as a way to mix things up. It teaches the body to remain in an active position while trying to keep the battle ropes moving. Everything has to be in sync for the ropes to move and that’s great for building a mind-muscle connection.

CLICK HERE FOR THE BEST BATTLE ROPES FOR HOME

The first thing you’re going to focus on is your feet.

It is the feet that are going to matter most when it is time to settle in and make sure you’re getting enough leverage throughout the movement. Otherwise, it becomes rather difficult to use battle ropes effectively without messing up or losing energy throughout the process.

To get started, you are going to set your feet in front of the battle ropes. They should be easy to reach when you bend at the knees. This will ensure your feet don’t move once they have been set into place.

You will want to make sure they are at least shoulders’ width apart. This is going to give you a stable base to work from when it is time to use the battle ropes properly.

At this point, you want to make sure the feet are firmly planted on the floor and you are ready to pick up the battle ropes. It will take a bit of time to understand how your body works but it will come naturally after a while.

Bend at the Knees

Now that your feet are set at shoulders’ width apart, it is time to think about your knees. You want to keep them bent (slightly) to ensure there’s enough leverage throughout the exercise.

In essence, you are going to bend them a little bit and almost sit back a bit. The goal is to provide enough emphasis on the entire body, so you can continue to push through the movement especially during the end of a session.

A lot of people tend to lean over on their toes and that will cause you to fall or lose balance. It’s important to sit back and bend those knees properly!

If you are correctly bending the knees, it is going to be easy to pick up the battle ropes and start moving them. This is when you know the body is firmly in place and isn’t going to tip over as soon as you move your arms.

Your core is going to play a big role when it comes to maximizing the amount of energy that is put into the movement.

Why is the core important?

If you don’t keep the core tight, the body isn’t going to remain stable. Instead, you are going to start arching your back and getting into an awkward position. This is one of those tips that have to be taken into account while using battle ropes.

Don’t assume it’s okay to let the core loose because it will come back to haunt you!

The goal should always be to set your base, grab the battle ropes, and then tighten your core. It should feel like a rock when you are ready to start. If not, continue to work on tightening your core and then go through an elongated session with the battle ropes.

The best battle ropes for home are the ones that are used properly. This is what you have to keep in mind at all times.

If you don’t lock that core into place, you will lose a lot of value from the workout. It happens to a lot of people and that’s why you have to concentrate on this tip.

It’s often easy to set one pattern when using the battle ropes.

For example, the average person is going to grab the battle ropes and alternate arms while moving them in a synchronized manner. This is great and is a wonderful starting point but that’s not the only way to do it.

You can also move them together in unison. This can be mixed with alternating battle ropes to keep the body challenged. Otherwise, you are going to set a pattern and almost go into “autopilot” mode, which is not as efficient.

When a person gets into a pattern, they almost start cheating the movement. They lose focus, their core loosens, and the back arches. Don’t let this happen and make sure you are changing things up.

The arms have to move properly and it has to be done from top to bottom.

However, you want to move the battle ropes with your entire arm. The hinge is your shoulder, not your elbow.

It will take a bit of learning but you will start to get the hang of it after a while.

Always set a rhythm when you are working out.

Yes, you want to change things up but the rhythm is key. This means whether you are moving the battle ropes together or alternating them, the ropes should move at the same speed. This is how you are going to become efficient with the movement.

It’s easy to lose focus of this and start flailing the arms but that is when mistakes are made. You can’t let this happen.

CLICK HERE FOR THE BEST BATTLE ROPES FOR HOME

Anyone that is sitting down and asking, “What Are Battle Ropes Used For?” will want to start with this guide.

Take a look at the advantages of using battle ropes, why they are great for weight loss, and how important it is to include them in your routine.

The average person tends to walk over to the treadmill for a quick run but that’s not always fun. Instead, it becomes increasingly boring to the point it feels like torture! This is why you have to take action and mix things up a bit with high-quality battle ropes.

Battle ropes are great for several different reasons and are going to be a wonderful addition to your setup.

A Pinch of Fitness is a participant in the Amazon Services LLC Associates Program, an affiliate advertising program designed to provide a means for sites to earn advertising fees by advertising and linking to Amazon.com.

Scroll back to top